Energy shortage is no surprise to many people nowadays, as a consequence humanity will have to rely on alternative sustainable energy. For this purpose, many options have been extensively investigated for the past years, but some of them still raise many issues. Current sustainable sources of energy have the disadvantages of being unreliable since the baseline production always varies depending on environmental conditions (wind, water, ultraviolet (UV)). Not only do we struggle to control the production of these energy but we also face storage issues. To overcome these two problematics, we had to think about ways of producing sustainable energy on-demand and being able to store it. Past studies and researches led us to consider bacteria as a potential candidate. Indeed, bacteria are cheap, reliable, fast and easily customizable organic machineries that are known to be very efficient for producing desired proteins, DNA, targeted molecules of interest, etc. But what about energy? 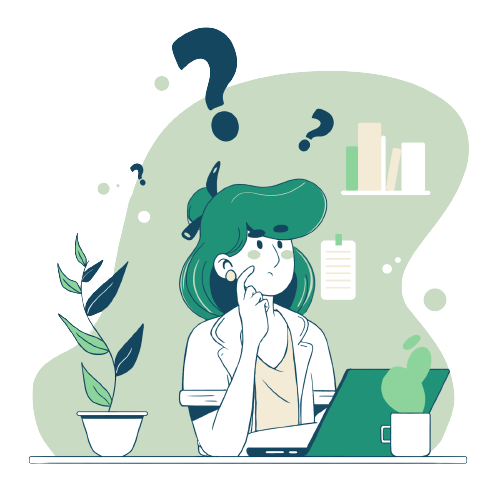 That’s the question that led to the creation of StarchLight. StarchLight first aimed to investigate ways of producing and stocking energy with Shewanella oneidensis (S. oneidensis), but we soon realized the project could have a double impact by revalorizing a waste that S. oneidensis could take up as its main substrate. Since lactate can be obtained readily from glucose through glycolysis1, the StarchLight team thought about organic glucose-based waste. Furthermore, we wanted StarchLight to be a multiple impact project, so we thought of using by-products that are not yet revalorized as our substrate and these wastes can come from any other sugar-based industries.

Glucose-based waste isn't very difficult to come by. We decided to talk to the head of the culinary lab and of the agro-food department, Romain El Andaloussi, to learn more and get information about which wastes would be useful. Together, we came up with different ideas, including bakery waste and brewers spent grain.

After talking to bakers and doing research, we decided that bakery waste would not be the best option because it is already very re-used for feedstock, and in France, bakeries are making more of an effort of limiting their waste altogether. 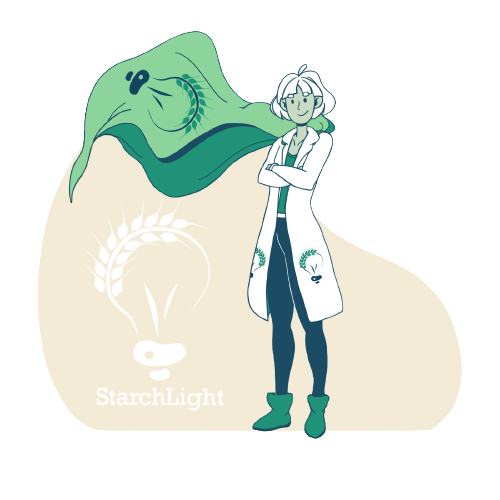 While studying the beer brewing process and thanks to our interviews with brewers, it came to light that about 20% of the output is waste, around 85% of it being Brewers Spent Grain, which results from the filtration of cereals after the fermentation process2 (Figure 1). In Europe alone, this leads to about 3.5 million tons of it being generated each year, and the global production amounts to around 39 million tons3. Most of this waste is completely unused, leading to it being incinerated. Therefore, we decided that using brewers' spent grain would be a great starting point to transform the world of energy generation and storage.

Figure 1: Scheme of the simplified beer brewing process. The beer brewing process starts by putting the cereals used in hot water in order to produce the mash. It is at this step that the brewers’ spent grain is produced. The mash is then filtered and the hop is added. Then, the yeast is added to begin fermentation. Once this is done, the beer is bottled.

Our first tiny hero is very well known: Escherichia coli (E. coli). In order to use the brewers’ spent grain as a substrate, we decided to degrade it into lactate so that S. oneidensis could use it as feed. To do so, we express an amylase in E. coli to degrade the remaining starch in the spent grain and produce glucose. The glucose then goes through glycolysis, which gives pyruvate. A D-lactate dehydrogenase that is synthesized from the Lactobacillus delbrueckii genome is also expressed in E. coli to improve lactate production.

Not only do we want to produce electricity, but we also wish to store it in a battery-like way. To do so, the StarchLight team decided to create an innovative energy storage system by storing electricity as poly-lactate (PLA). Indeed, our E. coli is engineered to produce the lactate, but it then "activates'' it into lactyl-CoA thanks to the Propionyl-CoA transferase, and then a Polyhydroxyalkanoate (PHA) synthase polymerises it into PLA4,5 (see Figure 2). Finally, this PLA will be degraded back into lactate thanks to our PLA depolymerase (PLAase) enzyme, and the lactate will be excreted from the cell to be fed to S. oneidensis. This part will happen on demand when exposed to blue light, that serves as an on/off switch for our battery (see Figure 3).

Figure 2: Representation of the production of lactate and poly-lactate by StarchLight bioengineered E. coli. The first part of the StarchLight system is the production of lactate thanks to our bioengineered E. coli. E. coli produces an amylase to degrade the starch in the spent grain into glucose. It then uses this glucose to produce lactate thanks to a D-lactate dehydrogenase. This lactate is activated by an addition of a CoA group thanks to a propionyl-CoA transferase, and then polymerised into poly-lactate thanks to the PHA synthase.

This on/off switch is possible thanks to the EL222 protein that we identified from the iGEM Registry of Standard Biological Parts, courtesy of iGEM UCL 2017 team. EL222 is a natural photosensitive DNA-binding protein that binds DNA when exposed to blue light (465nm). Indeed, blue-light exposure will induce a conformational change in EL222 that will activate RNA polymerase recruitment and transcriptional activation. It does this by inducing the Pblind promoter that will control the expression of our depolymerase.

Figure 3: Representation of the depolymerization of poly-lactate thanks to the EL222 switch The second part of the StarchLight system is the depolymerization of the polylactate. This happens thanks to our on/off switch, EL222, which is an optogenetic system activated under blue-light that induces transcriptional activity. When the system is ON, the PLA depolymerase enzyme can depolymerize poly-lactate into lactate, which is then fed to S. oneidensis so that it can produce electricity.

This system is how we will be able to feed lactate to our second bacterium, Shewanella oneidensis. Indeed, the StarchLight system uses two different bacterial strains firstly because of the good characterization of poly-lactate production in Escherichia coli. Moreover, E. coli are easier to cultivate with flexible conditions. On the other hand, Shewanella oneidensis is well studied for producing electricity and much research has been done for improving the electric current of this strain.

It is now time to present our electricity producing hero ! This one is only about 1µm in diameter, but you will be amazed by its abilities. Its name is Shewanella oneidensis (S. oneidensis) and was first discovered on an isolated lake in the US just 35 years ago6.

Shewanella oneidensis can produce small electric currents by means of electron chain transfer located in its inner membrane. To do so, the bacterium forms a biofilm that facilitates the contact between S. oneidensis and an oxidized metal. Moreover, it is known that the biofilms formed are stronger when the nutrient levels are poor7.

Once the biofilm is formed on the metal, S. oneidensis transfers electrons from their cells to the metal for respiration, mainly done thanks to cytochromes, meaning electron transport proteins that associate energy transitions with electron transfer. Cytochrome proteins have a protein structure containing a heme cofactor, itself composed of a ring of conjugated double bonds surrounding an iron atom that can acquire and transfer electrons with ease thanks to close energy levels, which facilitates small energy transitions8. These energy transitions prevent the loss of energy as heat by instead converting the energy to small processes like pumping electrons across a membrane or reducing a metal.

In S. oneidensis, there are multiple cytochrome c molecules in different areas, including the outer membrane where the MtrC cytochrome is in contact with metals to which electrons are transferred. The MtrC is so important to metal reduction that the strains that are missing them are considerably slower at metal reduction9.

During the reduction process, riboflavins (or vitamin B2) can intervene to conduct electrons to metals that do not have direct contact with the extracellular cytochromes (MtrC) thanks to conjugated double bonds10–12 (see Figure 4). Knowing this, StarchLight's team plans to transform S. oneidensis to overexpress MtrC in order to amplify our energy production. 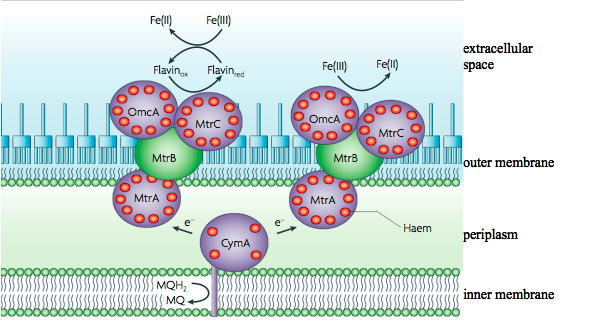 Figure 4: Cytochrome c molecules with multiple hemes transfer electrons from membrane soluble quinones in the inner membrane. Electrons then move through the outer membrane (MtrA, MtrB protein) to the extracellular surface (MtrC and OmcA), where they can contact insoluble metals directly (pathway to the right) or be shuttled by flavins to metals at a farther distance from the cell surface (pathway to the left) (Photo from Fredrickson et al., 200813)

Finally, in order to assemble our two heroes in a functioning team, we designed our own Microbial Fuel Cell (MFC).

A fuel cell is a device that generates electricity via the reduction of a fuel and the oxidation of another reagent which is often water. In the case of an MFC, the redox reactions are carried out by microorganisms. The MFC uses the electrons created by S. oneidensis to produce electricity. When S. oneidensis has created its biofilm on the anode, they separate the hydrogen from their feed. The electrons produced reach the cathode by traveling through the resistor, and the protons cross the proton exchange membrane. At the cathode, oxygen acts as the terminal electron acceptor, and the electrons and protons are combined with oxygen to make water14.

Since we have a two-bacteria system, our MFC has three separate compartments : one with E. coli and the spent grain, one with the anode and S. oneidensis, and one with the cathode. They are all separated with membranes. Between the first and second compartments, there is a lactate-selective membrane. Between the anode and the cathode, there is a proton exchange membrane. (see Figure 5) 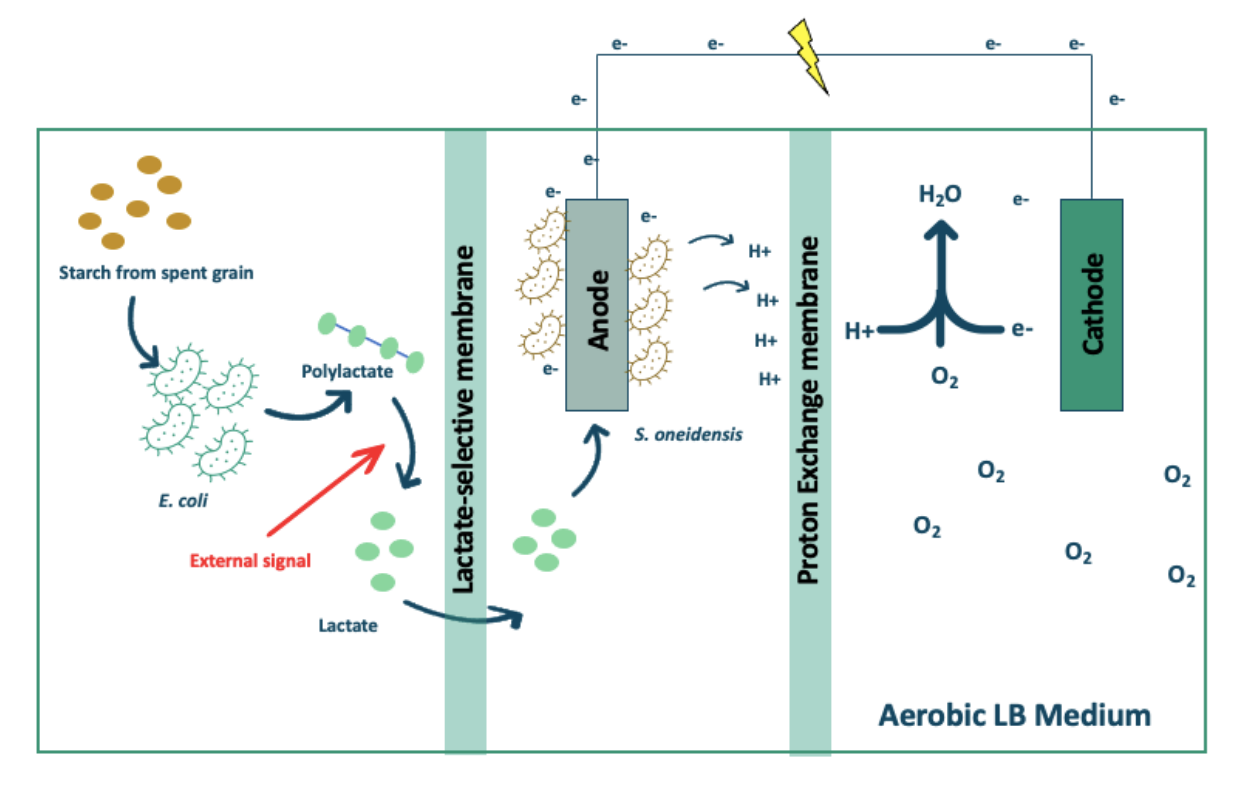 Figure 5: Scheme of the StarchLight MFC. The StarchLight microbial fuel cell has three compartments. The first compartment, on the right of the scheme, is where the bioengineered E. coli degrades the starch from the brewer's spent grain to produce polylactate. When E. coli receives an external signal, here blue light exposition, it degrades the polylactate into lactate. The lactate goes through the Lactate-selective membrane into the second compartment where S. oneidensis is growing on the anode. S. oneidensis uses the lactate to produce electrons that go to the cathode thanks to the electric wire. It also produces protons that go through the proton exchange membrane into the third compartment.