The iGEM Part Registry is the core of the competition, highlighting the collaborative and supportive nature of the competition. During our iGEM year, we used and designed multiple parts, and wanted to document them to ensure that future iGEM teams have proper resources to conduct their research relying on the iGEM community. To promote this we also added a great amount of information on each part to ease the burden of future iGEM teams, since all the background information and experimental details are on the same page.

This year, we created and uploaded 75 new well-documented parts to the iGEM Part Registry, including one promoter, one reporter, multiple toehold switches, and sensor plasmids constructed of some of the toehold switches. All our parts in the Registry are added by Jesper Mickos, our head of Wet Lab. In Table 1, we provide the summary of all the parts we have made during this iGEM year. In addition to the parts we added to the Registry, we used a few existing parts from the Registry in our work, including the pODD1 vector (BBa_J428381), T7 promoter (BBa_K2150031), LacZ (BBa_I732005), and T7 terminator (BBa_K731721), as well as added information on the pre-existing T7 RNA polymerase part page (BBa_I2032).

Using T7max in a T7 system requires only changing the promoter to T7max promoter since T7max is compatible with all other existing elements in a T7 system. The benefits of T7max promoter include higher protein synthesis yields from linear plasmids compared to the regular T7 promoter due to an elevated transcription rate that compensates for linear DNA degradation in in vitro systems. Deich et al. compared T7max promoter with the classic T7 promoter in several different cell-free expression systems, e.g. PURE system, wheat germ extract, and rabbit reticulocyte extract, and concluded that T7max was more efficient with each of them (Fig. 1). 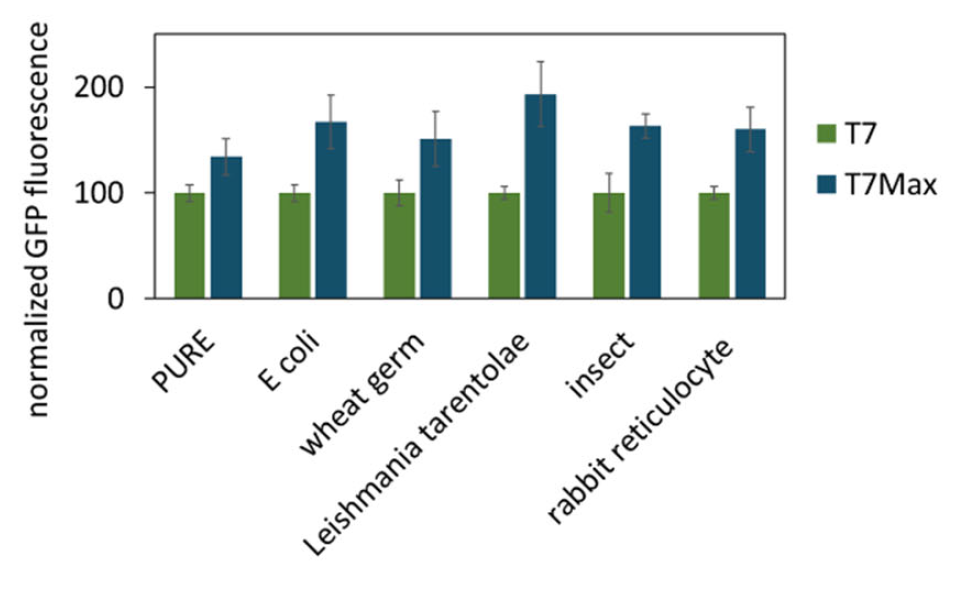 mScarlet-I is a monomeric synthetic red fluorescent protein. The protein is a variant of mScarlet, which has the longest fluorescence lifetime of any RFP up to date. The I-variant has a T74I mutation, which drastically reduces its maturation time from 174 to 36 minutes. While its brightness of 56,16 is lower than the standard mScarlet, the faster maturation time leads to faster fluorescence activity and therefore more intense signal in some applications. mScarlet-I has a maximum fluorescence at 569/593 nm (Figure 2), so it is visible to the naked eye in standard lighting.

mScarlet-I is a part of mScarlet series, a collection of three synthetic red fluorescent proteins (RFP) with different features introduced by Bindels et al in 2017. Series includes bright mScarlet, fast maturating mScarlet-I, and mScarlet-H with a fast lifetime. mScarlet-I and mScarlet-H differ from mScarlet by one amino acid substitution. 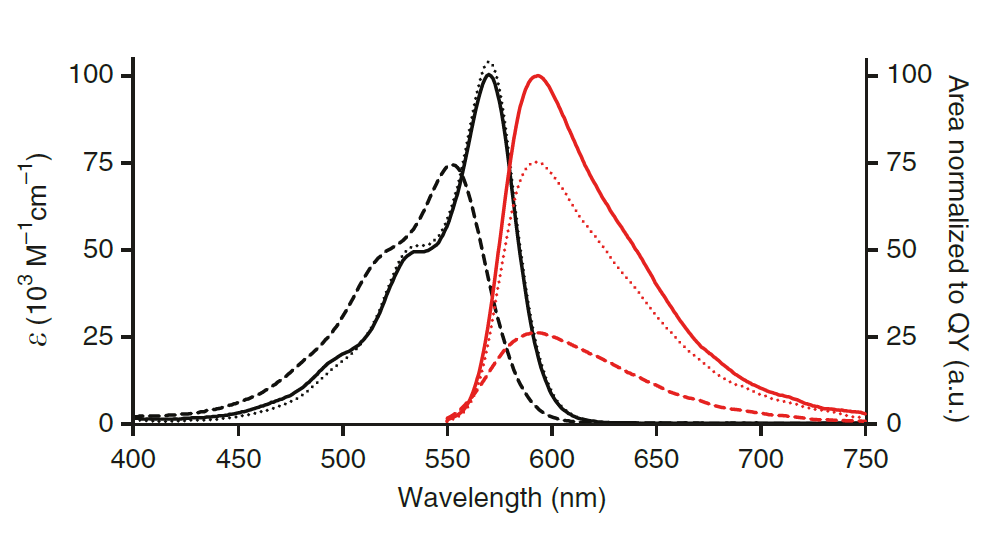 Bindels et al (2017) demonstrated that mScarlet-I as a part of mScarlet series did not exhibit any incomplete maturation, cytotoxicity, or unwanted residual dimerisation. The photochromicity of the mScarlets was also found to be negligible. This enables the usage of mScarlet-I as a FRET (Förster Resonance Energy Transfer) acceptor. They report the mScarlet series to perform well in fusion constructs due to its monomeric behavior, brightness, and low pKa.

The crystal structure of mScarlets has been defined at 1.47 Å in pH 7.8 (Bindels et al, 2017). The biggest difference between the mScarlet and mCherry crystal structures is that the phenolate ring in the chromophore is almost exactly in plane in mScarlet but out of plane in mCherry. Bindels et al (2017) list this as a possible reason for the difference in quantum yields.