While modeling our toeholds with NuPack we were confronted with the problem of not knowing how to use the software. Practicing the software usage took us a lot of time and with this kind of time and resource-limited project, it’s not ideal to be stuck on one part of the project for a long time. So, when we couldn’t find any up-to-date user guides for NuPack, but instead found IISER Tirupati, another iGEM team, struggling with it, we immediately decided to combine our powers and make a comprehensive user guide for future iGEM teams to refer to!

Our team, especially Jesper who had the most experience using NuPack, wrote about the usage of the program and compared the web application to the computer-installed version. Our partner IISER Tirupati described the installation process and provided a catalog of different Bio-Design tools.

The guide has the necessary help for installing the NuPack program on your computer and using it to design your first jobs. The guide also characterizes the differences between the web application and the computer-installed versions of the program, so that the reader is able to decide which one is the right one for their project. In addition to NuPack instructions, we included a list of other Bio-Design tools and programs made by previous iGEM teams to create a resource for finding alternatives and broadening one's tool reservoir.

This guide aims to make it easier for future iGEM teams to start using design tools while planning their projects. We want to provide opportunities to new or small teams that won’t have time to do all this research on their own. Also, we want to believe that our guide will encourage more life science students to add computational tools to their repertoires.

More about our partnership with IISER Tirupati can be read on the Partnership page.

As part of our project, our DryLab team designed several toeholds for different plant pathogens infecting crops, both in Finland and abroad. For example, our partners in iGEM Patras team searched for some local viruses for us that we included in our library.

Toehold switches are specifically designed RNA structures that fold to a stable stem-loop followed by a reporter gene. They can be designed to detect virtually any sequence. The stem-loop contains a ribosome binding site and a start codon preventing translation. The lower part of the structure unfolds when a specific trigger sequence binds to the binding site leaving only a weak secondary structure intact. Ribosome binding unwinds the rest of the structure which allows translation. More information about the toehold switch designing process can be found on the Modeling and Design pages.

We hope that our library can provide future teams insight into both toehold switch design and different detection methods for plant pathogens.

The work of our Dry Lab team is described in more detail on the Dry Lab page.

New documentation to an existing Part

We added new information from the literature to the Main Page of an already existing Part T7 RNA Polymerase (Part:BBa_I2032). Here is the information we added:

T7 RNA Polymerase (T7 RNAP) is a single subunit protein originating from T7 bacteriophage that catalyzes RNA synthesis. It is known for its high processivity and great specificity to the T7 promoter. T7 RNAP was isolated for the first time in 1969 from E. coli that was infected by T7 phage (Tunitskaya & Kochetkov, 2002).

T7 RNAP and the T7 system are used in a wide array of applications. Because of its simplicity, it is often used as a model when studying transcription mechanisms (Kochetkov et al, 1998). However, its use in eukaryotic cells is hindered by the need for posttranscriptional modifications and the transportation of the eukaryotic mRNA from the nucleus to the cytoplasm (Wang et al, 2018; Borkotoky & Murali, 2018).

There are three structural motifs, A, B, and C, situated inside the cleft that are conserved through most single subunit nucleotide polymerases (Kochetkov et al, 1998). Motifs A and C that have invariant residues of aspartic acid are observed in all DNA and RNA polymerases. They are situated in the palm subdomain. Motif B in the fingers subdomain is conserved in all RNAPs and some DNAPs and contains invariant residues of lysine, tyrosine, and glycine. (Tunitskaya & Kochetkov, 2002.)

The N-terminal end of the T7 RNAP has a role in sequence-specific promoter binding and opening the duplex DNA (Borkotoky & Murali, 2018). 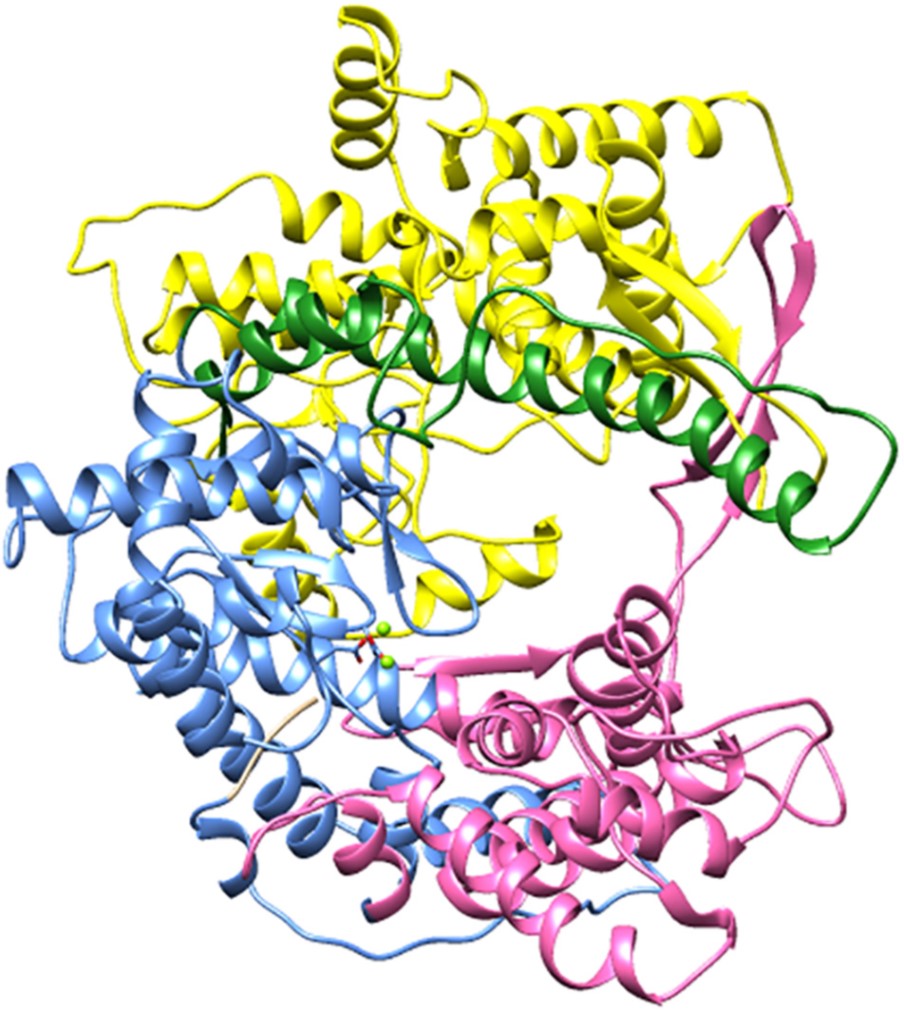 Figure 1. The three-dimensional structure of T7 RNA polymerase by Borkotoky and Murali (Borkotoky & Murali, 2018). The N-terminal domain is depicted in yellow, the finger domain in pink, the thumb domain in green, and the palm domain in blue.