GHB will be detected by measuring a capacitance change when the drug enters the sensor. When GHB binds to the transcription factor BlcR, a conformational change results in the disassembly of the tetrameric structure into two dimers, thereby causing its dissociation from the DNA binding sequence [1] . The dissociation of BlcR leads to a change in capacitance, a more detailed explanation of which can be found here. As GHB is present in certain drinks and endogenously in the human body, the sensor should be able to differentiate quickly between low and high GHB concentrations. Herein, we simulated a model based on the theory of the binding of substrate to surface-bound ligands [2]. By analyzing this model we determined the optimal conditions in the sensor, as well as the bioengineering steps that could improve its function. An overview of the input, the steps taken, and the output of the model can be seen in Figure 1.

Figure 1. An overview of the modeling done by SPYKE. We used lab data and literature to create the model. The results of the modelling provided the basis for the experiments which aim is to improve the binding affinity of BlcR to DNA.

Figure 2 shows a graphical representation of the biomolecular workings of the sensor. Our model simulates the output signal of our sensor by calculating the portion of BlcR bound to DNA in equilibrium. Our sensor is similar to the one described by Sankar et al. [3] , wherein DNA is bound to one of two metal plates in a chip. When a transcription factor binds to this DNA, the transport of charge-carrying molecules is inhibited, thereby raising the capacitance. We calculated the fraction of bound BlcR at equilibrium which corresponds to a capacitance value. We assume that the capacitance would change in a few seconds when BlcR is bound to or released from the DNA, as indicated in the UTI experiments and in Sankar et al. The model works in two steps:

Our sensor’s response to GHB can be summarized as follows: an increase in GHB concentration decreases the active concentration of BlcR dimers, thereby decreasing the fraction of DNA bound by BlcR, resulting in a capacitance change. 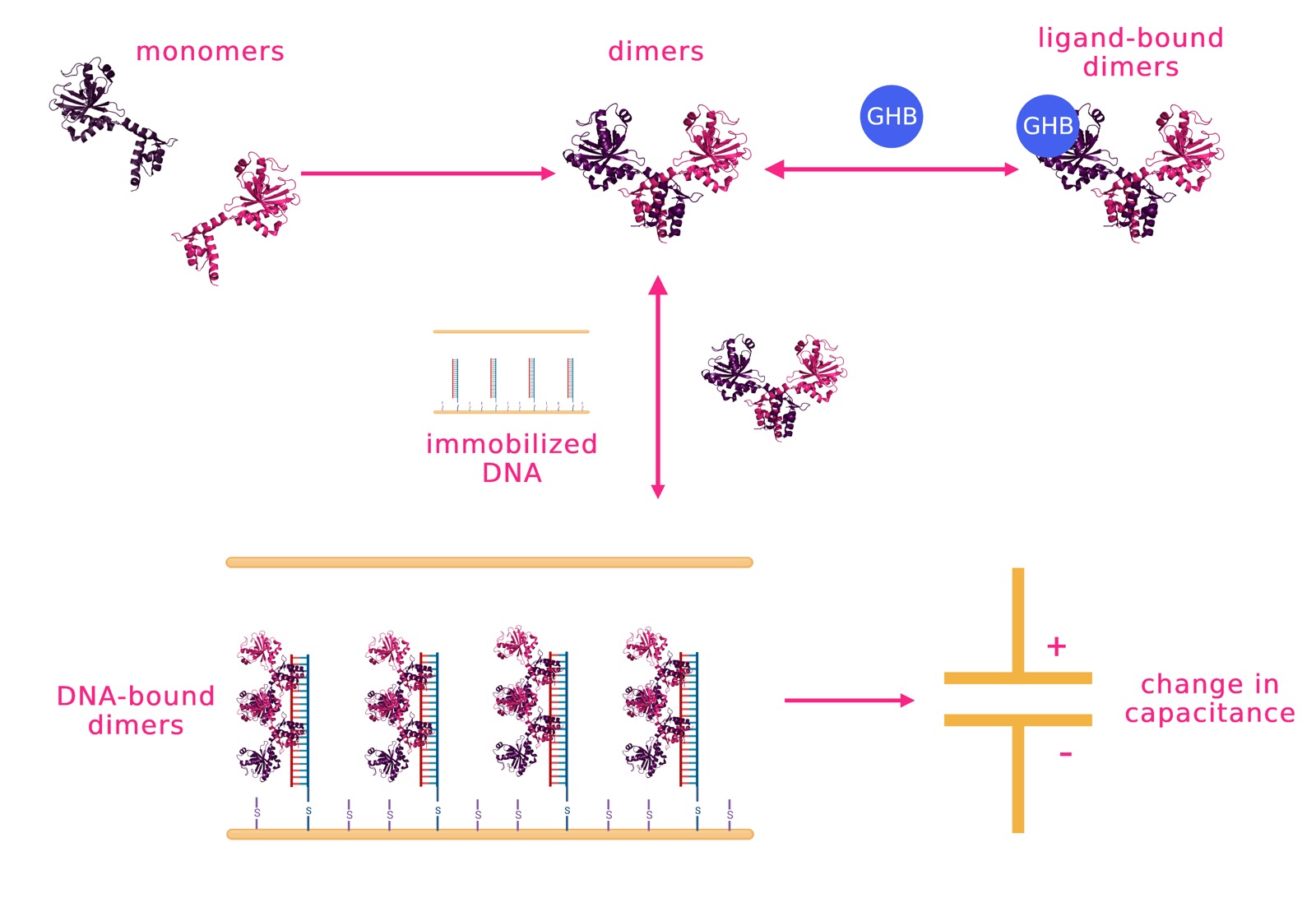 Figure 2. A graphical representation of the sensor’s biomolecular workings. Firstly, GHB converts the active dimer BlcR concentration into non-active BlcR dimers. The remaining fraction of BlcR binds to DNA. The capacitance of the electrode is proportional to the fraction of BlcR bound to DNA.

Modeling of the biosensor

When equilibrium is reached, the rate of formation of BlcR-GHB complexes is equal to its decay and the thermodynamic dissociation constant can be calculated as:

At t0, GHB gets added to the solution with BlcR and DNA, however, the amount of BlcR bound to GHB is still zero here. After some time, a new equilibrium is reached, where also the rates of formation and decay of GHB-BlcR complexes are equal:


At this new equilibrium with the presence of GHB, equation (4) becomes:

Calculating the fraction of DNA bound by BlcR

where BlcR2 are BlcR tetramers formed from two dimers. When equilibrium is reached, the following equation holds:

The total amount of BlcR does not change over time:

The fraction of DNA bound by BlcR is calculated with the following equation:

This fraction of DNA bound by BlcR corresponds to the output of the sensor. To make the most accurate simulation of our sensor, we calculated the binding affinities of our produced BlcR to DNA and succinic semialdehyde (SSA), the analog of GHB. For this we used the results of the Electrophoretic Mobility Shift Assay (EMSA) experiments and the method described by Heffler et al [5] . We used ImageJ to do the image processing and analysis. We were mostly interested in estimating the degree of cooperative binding of BlcR as Pan et al. only reported that there was cooperative binding but not the exact degree. An overview of the species and parameters used in the model can be seen in Tables 1 & Table 2. Several assumptions had to be made to create the model, as shown in Table 3. They were adapted from literature and wet lab experiments.


To calculate the binding affinity of BlcR to DNA we used EMSA results shown in Figure 3. 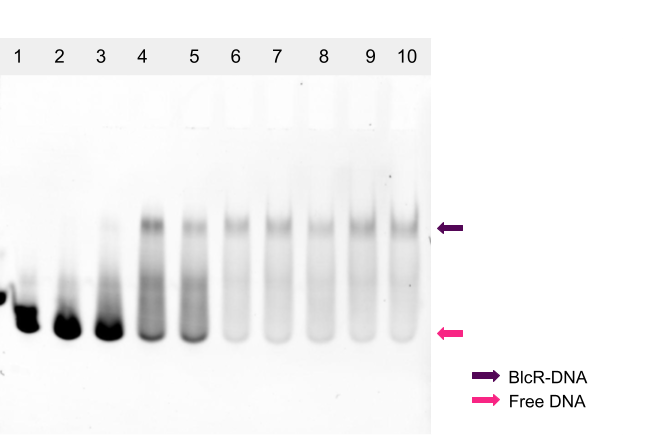 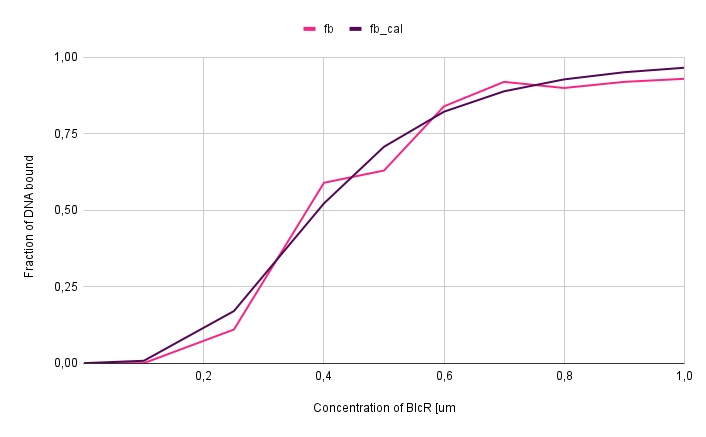 Figure 4. The fraction of DNA bound with BlcR for different BlcR concentrations. The pink line represents the data obtained from EMSA and the purple line is the formula it was fitted to (R2=0.987).

The Kd value resembles the two binding affinities found by Pan et al. [1] (120nM and 490nM). In the model, we use these values to closely mimic the conditions in our sensor.

As established before by Pan et al. [1] , one SSA molecule binds to one BlcR dimer. This means there cannot be cooperative binding. This simplifies the calculation of the binding coefficient as the Hill coefficient is one. To calculate the binding affinity of BlcR to SSA, we used the EMSA results shown in Figure 5. 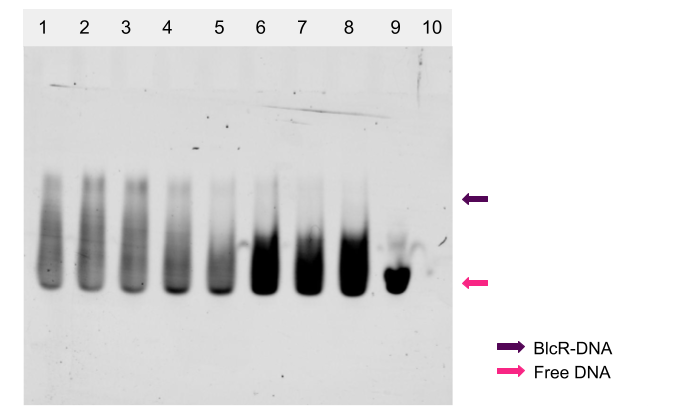 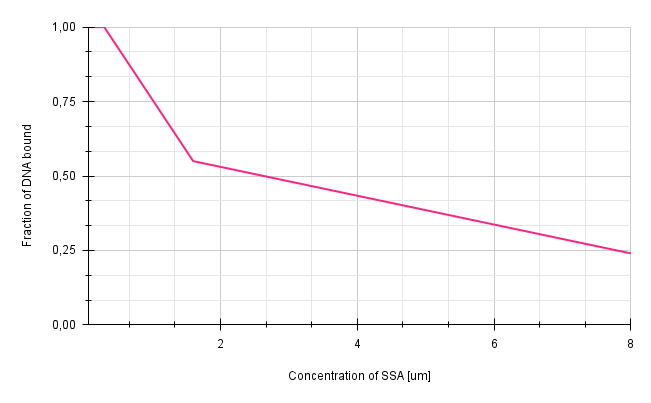 Figure 6. The fraction of DNA bound to BlcR for different SSA concentrations.

We implemented our model in Python, as it is an open-source programming language [13] and thus contributes to the core values of iGEM [14]. For our first implementation, we programmed the model with a combination of pure Python and NumPy, a commonly used expansion for Python that gives more methods for scientific computing. We ran the model for different conditions (see below) to get an idea of how our sensor behaves.

To find out how our sensor behaves without the addition of GHB, we ran our model over a large range of BlcR concentrations. Figure 7 shows the fraction of DNA bound by BlcR plotted against the BlcR concentration. The fraction of DNA bound to BlcR corresponds to the capacitance of the electrode. The capacitance is at its minimum when all DNA is bound and at its maximum when no DNA is bound. The model was run for a Hill coefficient of 1 and 1.79 to see differences between independent and cooperative binding of BlcR dimers to DNA. 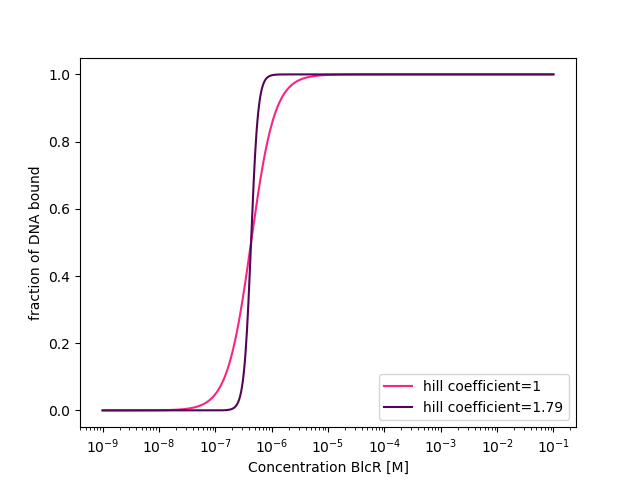 Sensitivity of our sensor 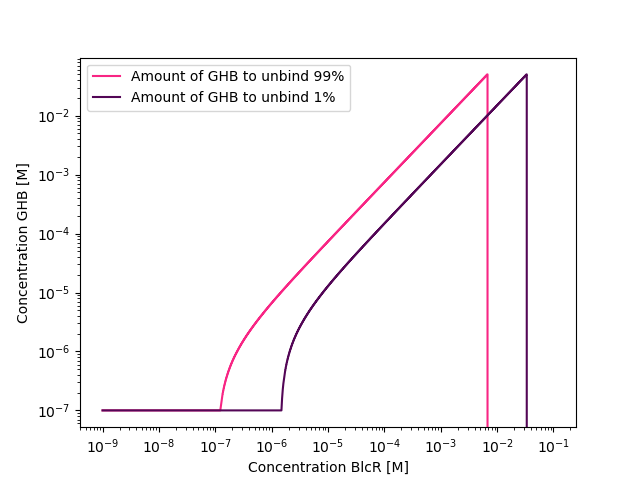 Figure 9. The sensitivity of our sensor for a range of BlcR concentrations. 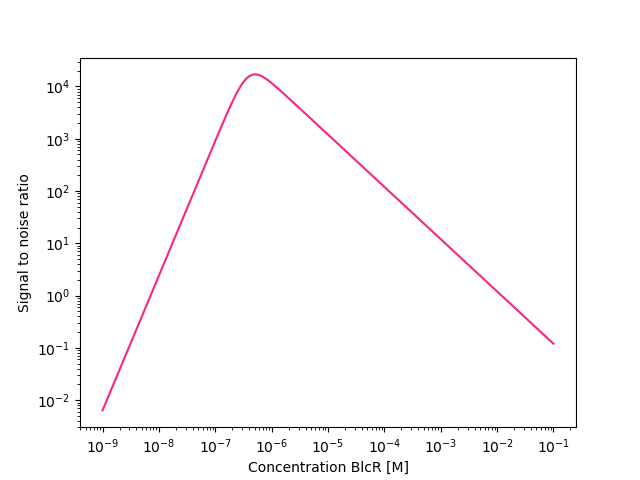 Figure 10. The signal-to-noise ratio of our sensor for a range of BlcR concentrations.

With a clear overview of how the model behaves, we determined the optimal conditions for our sensor. We tested our model on the average GHB concentration found in spiked drinks (50 mM) [5] . As discovered during aggregation experiments (Notebook 4, 26/09/2022) the maximum BlcR concentration obtainable before aggregation occurs is 7.9 μM. To function properly, the BlcR concentration in the sensor should be below this value. We looked at possible ways of improving the entire system based on the simulation results.

The optimal BlcR concentration could be determined in three steps: 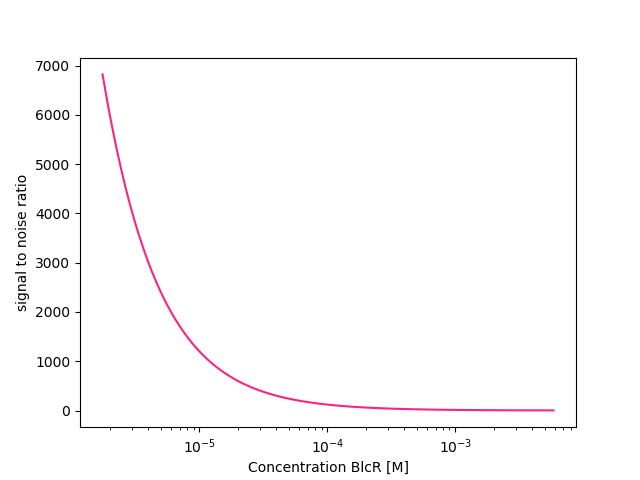 Figure 11. The signal-to-noise ratios for the possible concentrations of BlcR. The higher-bound GHB concentration is 50 mM.

Unfortunately, alcoholic drinks can already contain a small concentration of GHB without being spiked [15] . We introduced a cutoff value of 50 μM, as suggested by the NFI , to avoid false positives resulting from the endogenous concentration of GHB in certain alcoholic drinks. Below this cutoff value the sensor should not give a warning signal and thus most of the DNA should be bound. We ran the same analysis as before but used this already existing GHB concentration as the cutoff. The results of the simulations are shown in Figure 12. 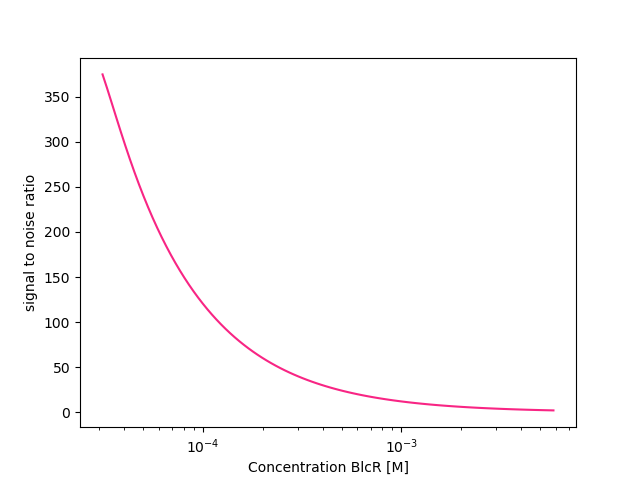 Figure 12. The signal-to-noise ratios for the possible concentrations of BlcR. The cutoff GHB concentration is 50 μM.

The last point is crucial for the success of our project. Without changing the properties of the system, our system would not work under normal conditions for all drinks due to the limited BlcR concentration. Thus, the sensor should be changed to some extent for it to be able to function as desired.

To get around the previously identified problems of a low signal-to-noise value and protein aggregation for drinks already containing GHB, we looked at all the variables of the system, to see if we could change them. The electrodes are made for optimal capacitance, and the DNA concentration is already optimized for maximum BlcR binding. The two variables we could possibly change without impacting the system in a negative way are the binding affinities of BlcR to DNA and the binding affinity of BlcR to GHB. To determine which of the two would improve the sensor’s response more when changed, and to see if the affinities should be increased or decreased, we ran the model over different dissociation constants (Kd) of BlcR to DNA or GHB. Note that a higher Kd translates to lower binding affinity.

We wanted to test the impact of changing the dissociation constants on the behavior of the model. For this, we calculated the amount of BlcR needed to bind at least 99% of the DNA. We modeled how the concentration of BlcR changes for different Kd values of BlcR to DNA (Figure 13a) and BlcR to GHB (Figure 13b). The previously mentioned cutoff value of 50 μM was again used.

To see how the sensitivity is affected by the increase in binding affinity between BlcR and DNA, we ran the model over a range of Kd values of BlcR to DNA. We calculated the concentration of GHB necessary to unbind 99% of BlcR at the maximum possible BlcR concentration before aggregation. The results are shown in Figure 14. 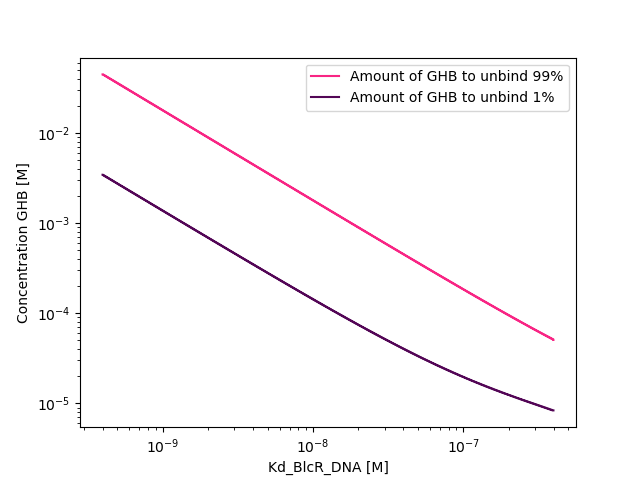 Figure 14. The sensitivity of our sensor for a range of Kd values of BlcR to DNA. 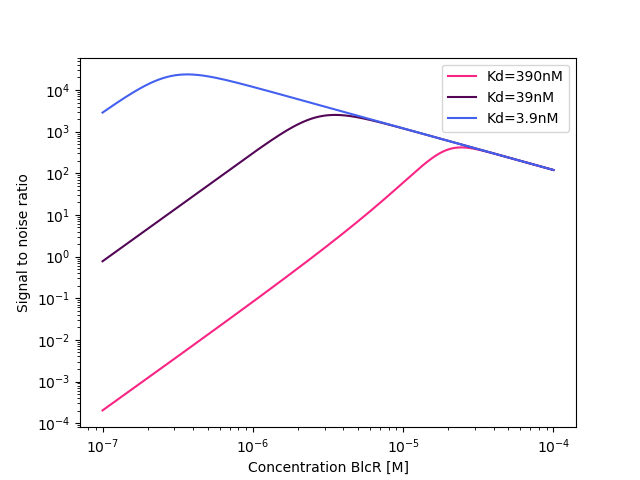 Changing the binding affinity of BlcR to DNA

We again ran a simulation to find out how the optimal BlcR concentration changes with an increased binding affinity between BlcR and DNA. The results are shown in Figure 16.

Figure 16 An animation of the signal-to-noise ratios for the possible concentrations of BlcR changing because of a decreasing Kd value of BlcR to DNA. The cutoff GHB concentration is 50 μM.

The model was created in the open-source programming language, Python, to make sure everyone can recreate and build upon it. We share the files for the software on our gitlab repository. Download links for Spyder and the required libraries are also included.