The occurrence of drink spiking with so-called rape drugs has been increasing over the past years, reaching new heights in the past year. In 2021 and 2022, as nightlife establishments reopened their doors after the pandemic, the number of reported drink-spiking incidents surged in The Netherlands, Belgium, France, the UK, and Ireland, as well as other parts of the world [1-6]. Not only are victims vulnerable to sexual assault, kidnapping, and rape, but drink spiking can also result in acute or long term health issues caused by overdosing.

Although there is nothing new about the use of alcohol or drugs to incapacitate victims in cases of sexual assault, the phenomenon of drink spiking (discretely adding drugs to someone’s drink with the goal of drugging them) first became prevalent in the 90s [7]. Various drugs can be used for drink spiking, provided they sedate a person after ingestion. However, the most common rape drug by far is gamma-hydroxybutyric acid (GHB), which is relatively easy to produce and readily available as an illegal recreational drug throughout Europe [8][9]. Although studies in Europe and the United States from the past decades have found various occurrence rates for GHB in sexual assault incidents, these studies cannot provide a reliable insight because of two issues.

First, statistics only consist of victims who filed a police report, which excludes a relatively large group of victims who are not aware of the drugging or decide not to file a report. Second, testing is done in the form of a general drug screening by high-performance liquid chromatography or gas chromatography, which are analytical methods only accessible to some hospitals or forensic institutes. Testing often does not take place until more than 24 hours after the incident, when GHB is usually no longer present in the body, because it has been metabolized to the point of negligibility [1][10].

Because of this, it is difficult for victims and police to obtain evidence of the drugging, and perpetrators are rarely held accountable. To find out more about the issues surrounding drink spiking and drug-facilitated sexual assault, see our pages on Human Practices, Integrated Human Practices, and Proposed Implementation.

A new way to detect GHB

To protect people from drink spiking, we need a sensor that can detect GHB rapidly, continuously, in-situ, and accurately. With such a device, it will be possible to detect GHB in a spiked drink and alert the user to prevent them from drinking it.

The mechanism behind the sensor relies on transcription factor protein BlcR from Agrobacterium tumefaciens. In nature, BlcR tetramerizes to bind to the blc operator sequence, repressing the expression of three genes in the blc operon. The blc genes code for enzymes responsible for the conversion of gamma-butyrolactone (GBL) to GHB, succinic semialdehyde (SSA) and succinic acid (SA), which allow A. tumefaciens to utilize naturally occurring GBL as a carbon and energy source. Tetramerization is blocked by binding of GBL, GHB or SSA to the protein, causing BlcR to dissociate from the operator[11][12]. See Figure 2. 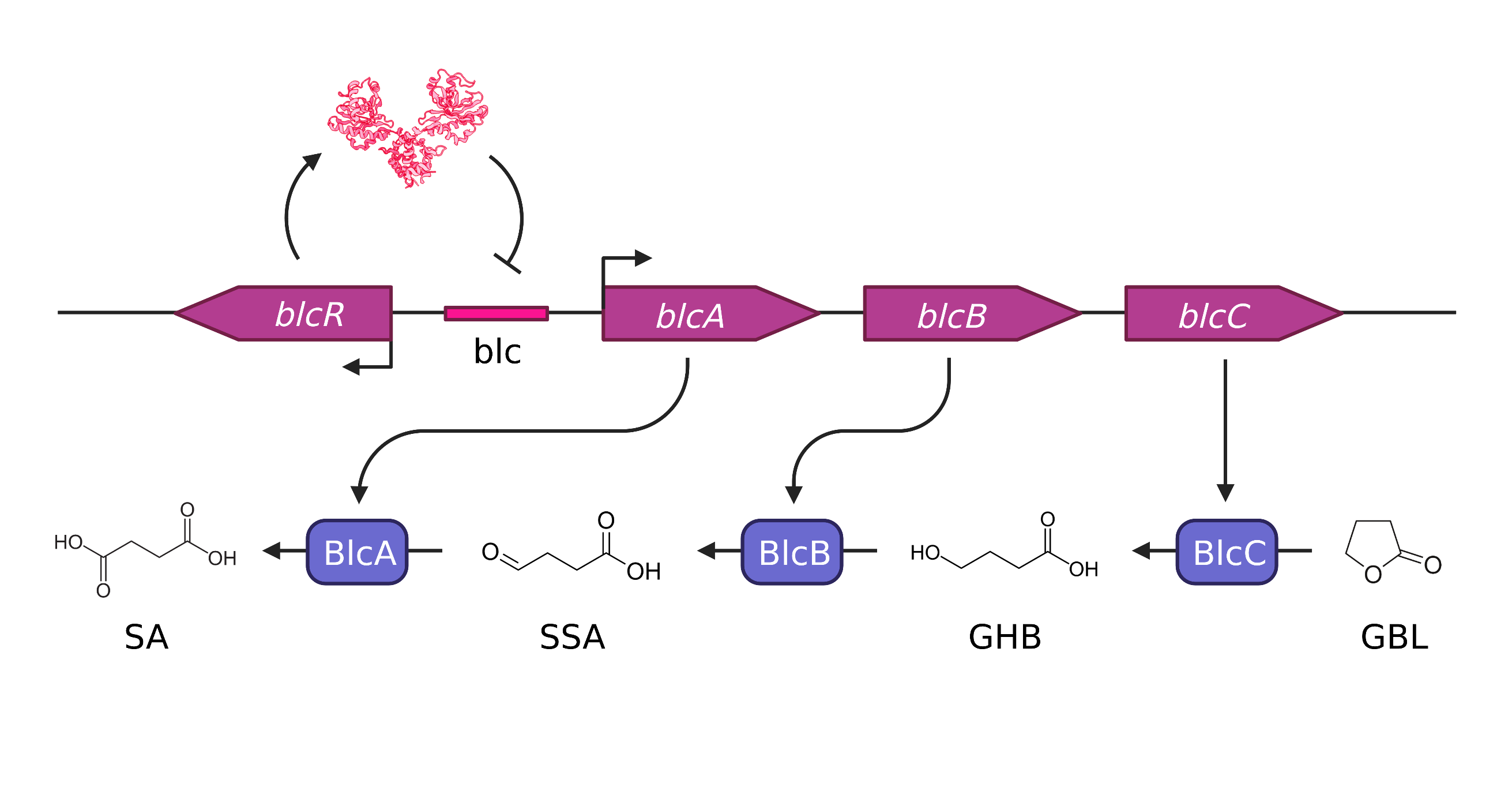 Figure 2. The regulatory mechanism of BlcR on the blc operon and the pathway from gamma-butyrolactone to succinic acid of Agrobacterium tumefaciens.

We have designed a novel bioelectronic sensor for the detection of GHB in drinks by combining the specificity of this mechanism with the reliability of electronics. BlcR is tethered by dsDNA oligonucleotides carrying the blc operator sequence to the surface of a gold interdigitated electrode (IDE). We can measure the capacitance of the IDE, which is influenced by the protein molecules around the fingers of the electrode. If GHB enters the system, it will bind to BlcR, which will then release from the electrode causing the capacitance to increase. An electronic circuit will interpret the change in capacitance and produce an output signal to warn the user.

The bioelectronic sensor is integrated in a cup you can drink from. A compartment in the bottom of the cup, separated from your drink by a membrane, holds the electrode with the tethered protein. Another compartment holds the electronics needed to measure the capacitance, and a LED light that turns on to warn the user when their drink has been spiked. To read more about our system, visit our Hardware and Safety pages. A photograph of the prototype can be found in Figure 3. 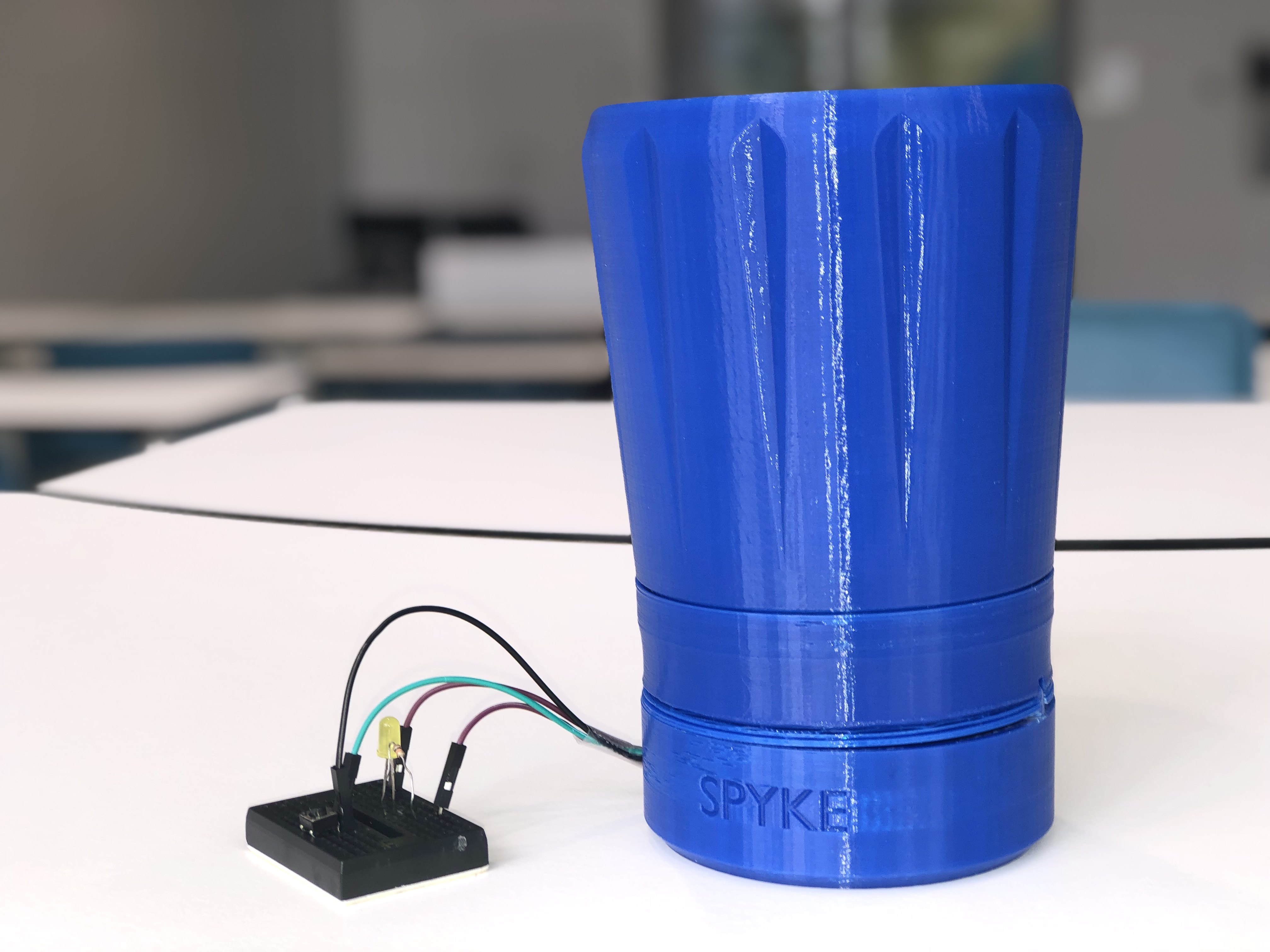 Figure 3. A photograph of the final 3D-printed and assembled device.

To discover the problem of GHB spiking, we did not need to look any further than our own social circles. Sadly, every member of the team has at least one friend or acquaintance with first-hand experience. In the Netherlands, especially among students, drink spiking is quite common. Because of this, the problem was already on our minds as we went into iGEM. However, we only saw it as a potential project when we discovered science to support it.

While we have created a novel system, our project builds upon previous work of researchers as well as iGEM teams. As a first step, we were inspired by the work of Dr. Fiorenzo Omenetto (Tufts University, USA), who has developed silk-based bioelectronic sensors for application on the body. We were specifically inspired by a sensor designed to be attached to a person’s tooth and continuously measure their saliva, in order to monitor food intake [13][14]. This led us to the initial idea of developing a similar tooth-mounted sensor for GHB, and to the possibility of using a bioelectronic system.

At the same time, we noticed that the iGEM team of Bielefeld University of 2015 had also worked on developing a sensor for GHB as part of their project [15]. Although the design for a cell-free expression-based test strip proposed by them did not fit with our goal of creating a rapid, continuous sensor, it led us to the most important part of our sensor: the transcription factor BlcR. Thus, we decided to utilize the specificity of BlcR in a bioelectronic system, in order to achieve speed as well as sensitivity.

Looking further into bioelectronic sensors, we found a working example of a transcription factor-based mechanism for the detection of a small molecule, which fits perfectly with our goal [16]. In this design, transcription factors are tethered to a surface by chemically immobilized DNA, obstructing the flow of charged electron carriers in the solution. When the transcription factor’s ligand is present, proteins are released from the surface and electron carriers can flow more freely, resulting in a change in current. From this design, we took the principle of releasing tethered proteins and applied it to a different kind of electronic sensor.

You can read more about the process of product design on our Integrated Human Practices page.

We worked on the design and assembly of the sensor using existing parts, as well as the engineering of individual parts of the mechanism to improve their performance. In our research, we made use of five different methods for measuring the binding interaction between BlcR and DNA. See Figure 4. 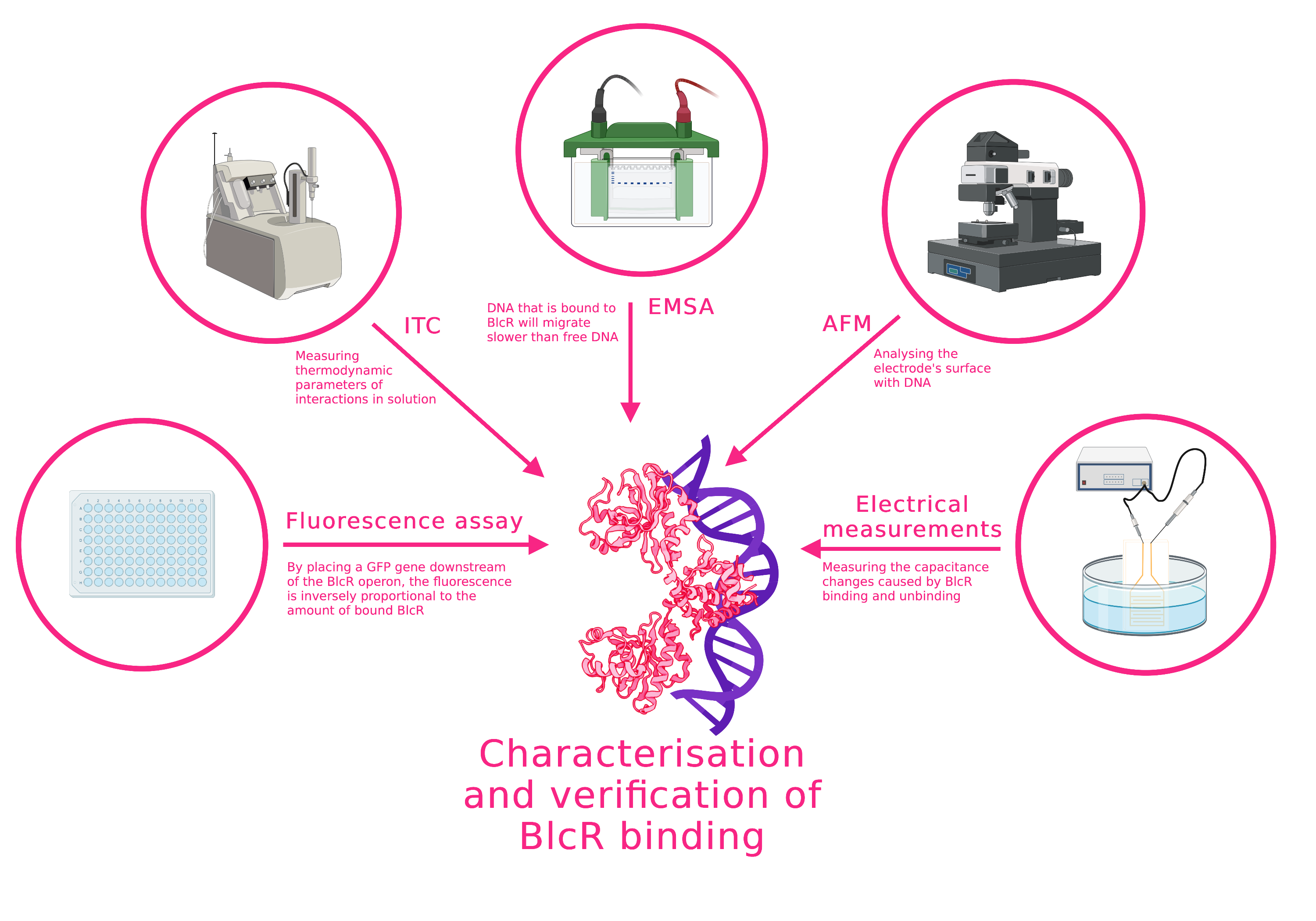 We were able to assemble our design and confirm the immobilization of BlcR on a gold surface by atomic force microscopy. The system was tested by adding SSA or GHB to the sensor, and we showed that a significant change in capacitance occurs when either of these compounds enters the system. You can read more about these findings on our Results page.

Additionally, we found possible improvements for different parts of the system. We designed variations of the blc operator DNA sequence and compared these to the wildtype by electrophoresis mobility shift assay. A number of variants showed an apparently higher binding affinity to BlcR in comparison to the wildtype blc operator. Upon investigation of their sequences we discovered an alternative set of inverted repeats in the operator sequence that appears to be essential for BlcR-DNA binding. You can read more about these results on our Results page.

While the sensor has been developed by us to the point of proof-of-concept, there is still work to be done to make full implementation possible. The entire sensor relies on BlcR, which is being used in conditions very different from its native environment. It is to be expected that BlcR is structurally unstable in these conditions, resulting in partial denaturation and inefficient binding. We evaluated the performance of BlcR under various conditions, and found that increasing alcohol concentrations affect the binding ability of BlcR, as explained on our Results page. The typical environment of alcoholic drinks (acidity, low temperature and alcohol content) influences the stability of proteins, and thus threaten the reliability of our sensor. To optimize our system, it is important to engineer BlcR to improve the stability under these stress factors.

For storage and distribution of our sensors, it would be necessary to lyophilize the electrodes after immobilizing the DNA and BlcR, in order to preserve the biomolecules. Testing the lyophilization and reconstitution of the entire system is something we have not been able to do during our project. It would be vital to future product development. Note that previously mentioned research into improving the stability of BlcR also plays into this, as the resistance to denaturation during lyophilization could also be improved.

Although we were able to construct a working prototype, it leaves much to be desired in terms of reliability, portability and production costs. We relied on commercially available hardware, but for production of sensors on a large scale to be possible, alternative or custom materials such as electrodes, circuitry and batteries have to be investigated. The design of the cup into which the sensor is integrated also needs to be adapted to improve user-friendliness and reliability, before it could enter the market as a product. See Figure 7. 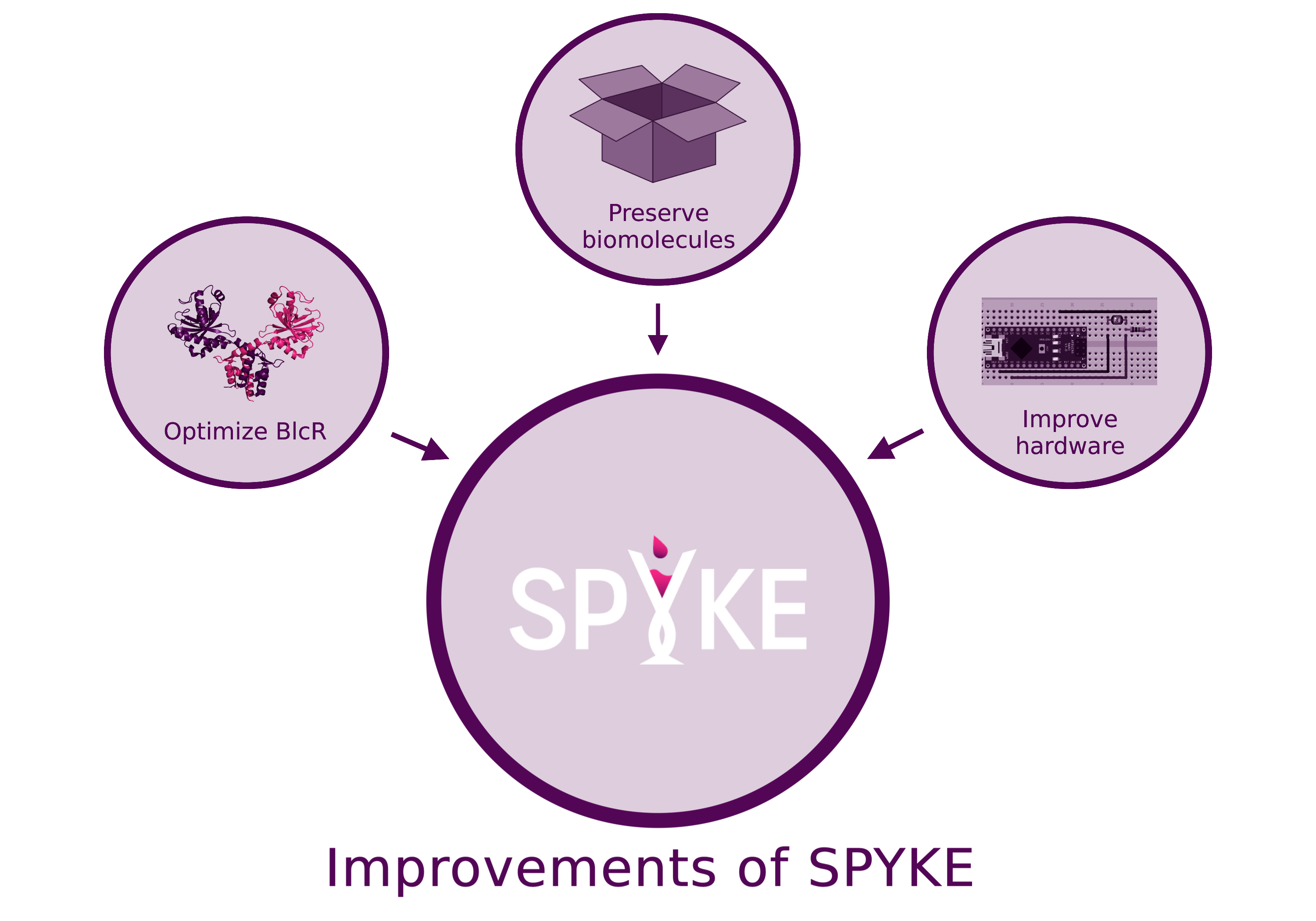 Figure 7. Overview of the elements of our sensor to be improved in future.